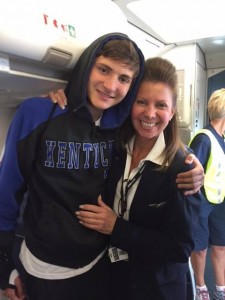 I must have logged a gazillion miles on a plane, and it’s now almost 3.5 decades of flying. My early career had me flying every Thursday through Monday, at a minimum, to an NHRA drag race or a NASCAR race or some other business or sports related meetings. If you follow motorsports, you know you they race every weekend during the season with just a couple of weekends off – usually Mother’s Day and Easter. In those days, I spent every weekend at the races.

The good news was I always was sitting in first class, meeting some very interesting people along the way. It was just my mode of transportation to get to where I was going to do business. Single, driven, independent career girl just crisscrossing the country, flying through every weather situation and enduring many delayed flights, connecting flights, de-iced planes, turbulence, sitting on the tarmac for hours and getting stuck in airports because of mechanical problems, weather, ice storms – you name it. No worries, I just made new friends and waited for the situation to fix itself. I didn’t even have the luxury of having a cell phone or a laptop to pass the time!

On April 17th of 2015, I had an unfortunate new flying experience and I was with my son. It was a completely traumatic experience and we are still struggling with it.

We left Phoenix in clear, sunny skies and then about 1 hour into the flight, we flew through hell. For about 10 minutes, which seemed like an eternity, we experienced extreme turbulence. The pilot asked flight attendants to be seated so we knew we were going to get some bumps, but it ended up surpassing the worst roller coaster ride of our lives. We were at cruising altitude at the time, so I had my laptop hooked up to Wi-Fi. As we went through it, it was shockingly violent and it just seemed to never end. I was holding on to my son and telling him to breathe and we would get through it. But truthfully we both thought this was the end. We started telling each other things that you would say to one another when you think your life is almost over, in between crying and breathing and watching the plane twist and turn and drop and bounce around in mid air. It was absolutely terrifying.

The lady next to me was praying with her head down on the tray table. The kids in the row behind us were screaming at the top of their lungs. I was trying to send a text to my husband but my phone was bouncing all over the place as I tried to type something. I got on my laptop and instant messaged my family from Facebook Messenger. We got a hold of my mother, my step daughter and my son’s Dad. We sent them messages telling them we loved them hoping they would get through to them.

After 10 minutes of this, it finally started to subside. The pilot finally spoke and explained we were through the worst of it, but there was no way to relax at this point. Every little bump after this was a trigger of the experience we just had. The worst part was we could not get off! We had to spend the next 3 hours in the air! The good news is we were able to communicate with our family through my laptop and the messenger app. That seemed to keep us calmer because we were connected to them. Plus we had Bess! — The world’s best flight attendant.

I can tell you that I have never been happier to be on the ground when we hit Florida. My son swore we would be driving back to Phoenix (and I was open to it…). No joke.

Read the letter I wrote to the CEO and President of US AIR and American Airlines, which were in the process of a merger at the time. This was the day after I arrived safely back in Arizona. You will get the “gist” —

I am seasoned traveler having logged hundreds upon hundreds of flights over 35+ years as a business traveler so flying is not a new experience for me. In fact, I was one of your highest level frequent flyers on US AIR when I was based in New England and US AIR was the primary airline to fly.

I am writing to you this morning from Scottsdale AZ after returning safely with my 15 year old son from a weekend trip to Orlando to see my mother who was recovering from heart surgery. On Friday April 17th, we departed PHX on USAIR 567. We experienced the most violent, severe, terrifying turbulence for about 10 minutes approximately one hour into that flight. I can tell you that my son and I were both terrified and completely traumatized sitting in Row 24. In all the years I have flown, this was the most severe turbulence I had ever experienced and the kind you read about on the news. My son, although only 15 years old, has traveled often and he has also flown by himself but this was different. I learned later that we flew though a “front” over Abilene, Texas. Afterwards, I realized there were reports of multiple tornados and baseball size hail and ground damage in and around that area that day.

What happened after this experience was amazing and I want you to know about your crews. The lead flight attendant on this flight was a woman Bess S. based out of Ft Lauderdale, FL. She knew immediately my son was experiencing extreme anxiety and he was having difficulty breathing and calming down. For the next 2 1/2 hours as the flight continued, she watched over him, checked on him, talked to him, knelt next to him, held his hand, told him that she had flown for 30 years and that everything would be okay and that the worst was over. She called the Captain (we learned his name was Captain Charlie), a 45 year experienced pilot. She told him that he wanted to meet us after the flight and he did. The Captain explained what we experienced and helped explain that sometimes this happens and reassured him the plane was built to handle this type of situation although my son was adamant he would never fly again. Bess shared her contact information with me and said if my son had any trouble or fear, to have him call her.

Now my challenge was getting my son back to PHX. We watched the SE weather religiously and rebooked several flights and finally made a last minute decision to board US AIR #450 on April 20 as that my best hope for a positive experience on the return. Get this, my son texted Bess the night before the flight and she called him right back. She told him everything would be fine, the weather looked clear and she recommended we get to the airport early. She looked up the crew to see if she knew them. She told me it was a PHX based crew and told me to request to pre-board and have us talk with the pilots and lead flight attendant. We did that and now we had another amazing experience with the Crew on US AIR #450. Lead Flight attendant Callie (22 years flying) introduced my son to Captain Brian and First Officer Steve. They spent time with him, told him that we were re-routed, showed him our flight plan, reassured him we would fly around the weather, and then we should have a clear flight after the first hour. We did have moderate turbulence in first hour but it was smooth for the next 4 hours. Callie was just as amazing. She checked on my son the entire flight, told him the pilots wanted to check on how he was doing, explained in advance why the seat belt sign was going on to manage his anxiety and continued to look after him. After we landed in PHX, I received a text from Bess. She wanted to make sure we got home safe. That is just above and beyond the call of duty! She is just amazing.

I just want you to know that you have some amazing employees and I hope you can share this with them and thank them for us. My son said if he ever flies again it would only be on USAIR. You gained a lifelong customer despite the trauma he experienced. My hope for my son was to reassure him that this was a rare event and I didn’t want this to prevent him from traveling the world and be fearful of flying.

I hope that perhaps you could recognize them and thank them for their outstanding service. I don’t have their last names so I cannot thank them personally. Please share if you can.

Best regards and thank you.

Since this happened, we have developed a life long friendship with Bess and we talk and text often. She knew that I wasn’t losing my mind or exaggerating– she told me that was the worst turbulence she had ever experienced and she’s been a flight attendant for 30 years! Ah — validation that I’m not crazy!

I didn’t expect a response to my letter to the CEO’s of American and USAIR, but I got one approximately 6 weeks later. Bess called me. She told me her supervisor told her “Bess, a letter that was received about you from a passenger.” Next was the phone call to me from American Airlines letting me know they received my letter and asked if they could share and publish our story in their June 18th company newsletter. I said, of course. Then another call just came December 11th asking me if they could have permission to share the story.

Journalist Ted Reed just published an article on the top 6 best airline customer service stories of 2015 and our story was selected and featured in www.thestreet.com. Read more here. http://www.thestreet.com/story/13398522/2/top-six-airline-customer-service-moments-of-2015.html

On top of that, the story hit American Airlines Facebook and Instagram Feeds and has over 7000 likes, 250 shares and hundreds of comments. Even Chasen who follows American on Instagram saw his pic and wrote, “hey, that’s me.”

Little did I know that my letter would create all of this attention. I just wanted them to know that they had some amazing people who worked for them who helped us get through this ordeal well after the initial flight.

We did end up flying home from Florida. I have flown 3 times since April, but my son isn’t quite ready. When he is, we will create the trust again with short flights and go from there. Although I was a little anxious at first, I made a decision to overcome it and remind myself how many other times I flew and never had this kind of experience. (Did I mention, I made sure to fly first class so I could order a stiff drink before take off, LOL).

Severe turbulence is rare and Captain Charlie told us we would most likely never have a flight like that again in our lives. THANK GOD ☺. I do know now, after getting more educated and speaking with so many pilots – including my best friend Chris from high school (30+ year pilot who flies all over the world) that a front is something they try to avoid but sometimes do encounter if they can’t get around it. But the planes are built to handle it and we should not worry at all. Turbulence are just like speed bumps in the road when you are driving. We just happened to get a doozy of a speed bump that day!

It would make me feel better if you have a similar experience to share so I know we aren’t the only ones! Send to deargina@ginaweber.com and I will share!

Love Gina. Keep flying! We will!