The Moment Your Youngest Gets Their Driver’s License 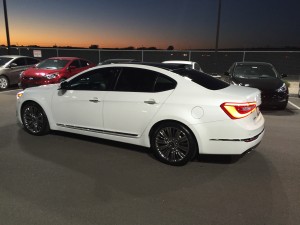 The last couple of weeks have been full of emotion and anxiety and there are many moms out there like me who have been through it several times –but does it EVER get easier? I am here to say “Hell No”.

I have a 19 year old daughter and another 16 year old son who just got his license 6 months ago so I’ve been through this before. My other son turned 16 on Tuesday, the youngest of three in this house, and my only biological child. This time it was extra hard. There’s a bond we have that’s indescribable, but that is an entire separate book I could write about being a single mom of an only child. It was a big day for him and a really hard day for me.

Turning 16, then attempting to get his driver’s license followed by the season opener of his high school basketball team was on the agenda. A big day. Turning 16 was a big milestone and I spent the day thinking about all the things he had achieved to date, while personally thinking about the treasured childhood memories that I hold close to my heart.

But the first goal of the day was for him to pass his driver’s license road test. Every teenager knows on the other side of that achievement was the beginning of real freedom and independence.

There was also some extra motivation involved. Three days before his birthday, I bought him his first car, which was sitting in the driveway waiting to be driven – if he passed. Although my head was telling me to buy him a car like my first set of wheels, which was an army green 1972 FORD LTD gigantic boat— my heart was saying no.   I went with my gut and put him in a car with as many safety features I could along with solid safety ratings, just so I could sleep at night! And I’m pretty sure he didn’t mind. He’s driving a pretty slick sedan. The good news is my negotiating skills, combined with the end of the month and Black Friday sales, ensured I got a smoking deal!

Now we are off to the DMV.   He gets called and there I sit awaiting the outcome. When I asked how long it would take, the lady said “Well, if you see him come back in 10 minutes he flunked the parking and failed, but if 20-25 minutes pass, that’s a good sign.” I watch the clock and 10, 15, 20 minutes pass. Six months ago he was a brand new driver unlike my other two. I swear they had been practicing since age 12 thanks to my fearless husband. But he started in the high school parking lot driving around in circles just a few months earlier. I was thinking, how I am going to survive six months of this! Slowly but surely, he graduated from the parking lot to the back roads, the main roads and the AZ freeways with yours truly teaching him the rules of the road.

About 5 minutes later he rounds the corner but he looks so serious. I make eye contact with him and give the thumbs up or down sign? He flashes a low, secret, close to his body thumbs up and a smile, and walks over to sit next to me. I ask him why are you acting like that and he said “Mom, because it was close and I don’t want the guy to change his mind”, LOL…. I’m not sure how I was to process the part about knowing it was “close”.   He told me he drove fine but was so nervous and he made 3 little mistakes.

Then it’s official. They call his name and hand him his license.

We drive home so he can get in his car. Now, he has to be at the high school to get on the away bus at 3:45 p.m. for his first basketball game. Now it really hits me. I know everything just changed for him and for me.   I have driven him everywhere he needed to be for 16 years and literally my life had been dictated by his schedule. He grabbed the keys and said “bye mom” and gave me a hug. I followed him out to the driveway and watched him drive away for the first time. I am not gonna lie…I was very misty, nervous and saying a prayer all at the same time. But he was ready. He was prepared.

The worst is over. It’s been almost 3 weeks now and I am getting used to my new free time and the realization he is on the road doing what all of us did when we got our license. I now have three teenagers behind the wheel! They are all growing up so fast and marching on with their own lives. We did a good job and raised three great responsible kids, but the worry and anxiety is always in the back of your mind isn’t it?   We just want them safe.

Yes, having teen drivers is nerve racking but it’s a right of passage. I think the bigger issue was what will I do first to fill my time and allow him to enjoy his new level of independence. So far — so good. We have a communication system that’s working and we are keeping each other informed which helps me with the worrying! I have a feeling though that’s never going to end.

I want to hear from the other moms out there who know what I mean!   Share your story at deargina@ginaweber.com and I will publish!

And the icing on the cake for his 16th birthday was winning the season opener!   WHAT A DAY!